Guru Jambheshwar University of Science and Technology, Hisar, was established on 20 October 1995 by an Act of the Legislature of the State of Haryana. It was formally inaugurated on 1 November 1995. It is named after Guru Jambheshwar Ji Maharaj, a saint environmentalist of the 15th century.
The university switched to a credit-based system for all courses in 2006-07. The prominent features of the credit-based system are the process of continuous evaluation of a student’s performance and flexibility to allow the students to progress at an optimum pace suited to individual ability and convenience, subject to fulfilling minimum requirement for continuation.

Telephone: +91-1662-276192, 263101, 276025, 263104
Jurisdiction of the University extends to the courses being run in the areas of science, technology, engineering, pharmacy, physiotherapy and management on the University Campus and all Technical Institutions (except B.Pharmacy institutions) in the districts Fatehabad, Hisar and Sirsa with effect from the academic session 2011-12 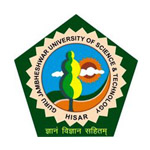 Being a University, the GJUST provides the all mandatory and needed facilities as par the UGC and ACITE norms. The main features in account of facilities are the CIL lab for research scholar, animal house for pre-clinical research, anti-sexual harassment cell, internal quality assurance cell, SC/ST welfare cell and shopping complex.
The GJUST campus is sited on the Hisar – Sirsa – Fazilka Road (National Highway-10) in District Hisar, Haryana. The campus is spread across the 372 acres of land, out of which 225 acres of land have been developed in facilities and amenities. The GJUST has located at 1 km away from the Bus Stand and 3 km from the Railway Station in the heart of the city.

Training & Placement Cell arranges for Pre-Placement talks, written tests, group discussions, personal interviews for the student. The Training and Placement Cell liaisons with the potential industries and provides necessary guidance to the students. The Cell facilitates arranging on-campus placements of students in various industries, makes arrangements for students to participate in off-campus drives.
The University enjoys a rare distinction of getting recognised by the University Grants Commission under Section 2(f) for recognition of degrees, on 11.1.1996 and, under section 12(B) of the UGC Act to be eligible for central assistance on 7.2.1997, i.e., within 15 months of its coming into being. The University opted for accreditation by National Assessment and Accreditation Council (NAAC), an autonomous organization of the University Grants Commission, in 2001-02. As a result of the exercise, the NAAC accredited this University at “A” level (institutional score 85%) among the Universities.